Watching.. so, during the day it doesn’t feel too weird that Josh isn’t here, but at night I don’t really know what to do with myself. So I’ve been watching a bunch of movies that I’ve been meaning to get around to. Netflix has so many great documentaries! The other night I watched one about a 23-year-old French man who posed as a 16 year old missing child in Texas, going so far that he actually fooled the family! The story was so well-told and produced that I wasn’t sure if it was real or a mockumentary! It’s called  The Imposter if you’re interested.

Organizing.. my pantry. FINALLY. It’s been such a mess for several months, so I took the last couple of days to throw out the expired items and reorganize the whole thing. Feels good! Now that I know exactly what’s in there, I’d like to start meal planning again.

Hanging out.. with Lulu all week! We’re bonding more than I expected. Usually Josh feeds her breakfast, takes her for walks, and plays hyper games with her, while I’m more her snuggle buddy in the evenings, and I feed her dinner about half the time. So, unsurprisingly, she’s always been partial to Josh. I was afraid she’d be sad & bored all week (that’s what happened last time Josh went out of town), but this time she’s being such a sweetheart. We went to the lake yesterday! 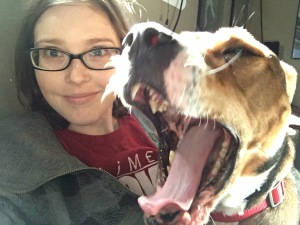 Feeling.. In general, I’ve been feeling pretty great, but today I’ve got a headache! Boo. I’m hoping that I won’t need to break out the tylenol, so I’m resting & drinking lots of water.

Thankful for.. text messaging and FaceTime. I love how easy it is to communicate throughout the day and to see each other before bed every night. I do miss Josh, but it’s not as bad as it would be if we couldn’t keep in touch with each other so easily.

I’m also thankful that my parents are in good spirits as they’re traveling, that Josh is having a blast at Disney World, that I can enjoy this solitude without feeling lonely, and for waffles with peanut butter.

What are you watching, organizing, hanging out, feeling, and/or thankful for this week?